The End of Spring and On to Infinite Summer 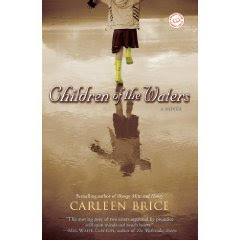 Blogging and working out are very similar in that if you stop doing either, the longer you wait to get back into the routine, the harder it is to get started again. I've been reading so many great books lately and since two of them were written by friends and published this month, I want to send some positive vibes about them out into the world.

I will dedicate separate posts to each of these fine books this week, but for now let me recommend This Lovely Life: a memoir of premature motherhood by Vicki Forman and Children of the Waters, Carleen Brice's second amazing novel. For now, I'll just say that both books touched me deeply and on a very personal level and I'll talk more about that and about these gifted writers and wonderful people when I post about each book.

In December of 2007 I did a post about my teetering TBR stack and I had a special category for cinderblock-like books that pose special challenges:

"Last, by by no means least, I have the titans. The long, hard tomes that I'd like to read for one reason or another. I suspect I'll save and tackle these big guys for vacations or in case I end up in a body cast and incapacitated for months on end. I'm very interested in hearing from anyone who has read any of these books. I can see this picture doesn't show the titles well, so they're: Gravity's Rainbow by Thomas Pynchon, The Recognitions by William Gaddis, Cloud Atlas by David Mitchell, Swann's Way by Marcel Proust, All four Rabbit Novels by John Updike and Infinite Jest by David Foster Wallace."

I'm pleased to say that I've read the first three volumes of In Search of Lost Time, by Marcel Proust and I've finally been given the incentive to start Infinite Jest by David Foster Wallace. 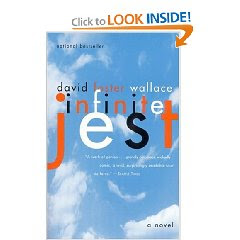 This Lovely Life and Children of the Waters.

David Foster Wallace, who was known for his essays, short fiction and novels was probably best known for his 1996 masterwork, Infinite Jest . I, like many of the other readers to tackle Wallace's 1,079 page novel between June 21st and September 22nd. At roughly 75 pages a week and with participation estimated at more than 2,000 readers, the idea of taking on the massive work is far less intimidating. Since I'm a huge cheater, I started the week before but did stop twice to read Infinite Summer participants had read much of his shorter work and had purchased Infinite Jest with all good intentions to read it. Many of those reading it now had started it once or twice before, but had never finished. I suspect most readers were like me and after flipping through the densely written, heavily end-noted monster decided that a book like this would need time specially set aside for it.

Social networking has really enhanced the "we're all in this together" feeling of this summer read with over 2,500 people following Infinite Summer on Twitter and over 4,000 members on the Infinite Summer Facebook group.

As of this evening, I'm on page 395 and after admittedly battling through the somewhat disorienting, yet captivating first two hundred pages, I am on board and strapped in for the ride. I've never read anything quite like this and sadly, neither I nor anyone else ever will again. Certainly, Wallace's tragic suicide after a lifetime battling clinical depression has given this project a bittersweet edge.

I have a whole list of books I've read since the last time I posted and I want to hear about what you've all been reading. How are you? I've missed you guys.
Posted by Lisa at 11:01 PM

Moonrat recommended you to me shortly after your temporary evaporation, before it became obvious that's what it would be. Eudaemonia has been in my Google Reader since then; how nice to see the cobwebs suddenly blown away!

Yay, you're back! And I'm so excited you're participating in the Infinite Summer! I am too, although I'm late to the party. I am only on page 49 and will spend this week catching up. When I heard about it, I looked over at the bottom of my TBR bookshelf and there it sat. I pulled it out and dusted it off. I'd bought it in 1996, a first paperback edition. I figured if I don't read it now, I never will. So I'm reading. I'll be doing a post on the project later this week and then, I suppose, periodic updates. I love the idea of reading it all together and that we'll be able to look back and remember "the infinite summer."

Glad you're back! I always love hearing about what you're reading!

I just can't deal very often with the tomes myself. As for the books you mentioned, I'm sure they're perfectly good but you know my reading habits. I'm not likely to try any of them. the idea of reading the Rabbit books in particular makes me shudder. I read Updike's Poorhouse fair because it was short. The writing was quite good, but I had not a scintilla of interst in the story. Different strokes for different folks, of course. I did read the Harry Potter series last month, and some of those are TOMES.

You fell into books and became lost in their pages...it happens, but happy you're back!

You're back! Happy Day.

So glad you're back. I've read three of the Rabbit books (I read one a summer and have the last to read this summer). I adore them -- they're vulgar and nasty and beautifully written. I have no interest in David Foster Wallace's tome -- tried to read it once and just find it unreadable. I've never been one to slog -- if I don't like it, I drop it. If I read a "tome," it's probably Russian or Irish. But that's just me. I am finishing Jayne Anne Philips' novel Lark and Termite. Her writing is weird and gorgeous. I've read everything she's written and wonder whether you'd like her. I think so. Enough for now...

welcome back. I'm not reading many blogs these days. Yours I can't miss.

me too!! i noticed a couple weeks back that i was only keeping up with you via facebook status messages, but i didn't want to come across as a nag! glad you're posting again :)

also, some Gaps people are going to start reading GRAVITY'S RAINBOW at the end of August. is you need virtual company.

Good to *see* you again!

No way am I going near Infinite Jest but I just posted on Children of the Waters and Vicki's book knocked me over. Both brave works indeed. K.

I'll join the chorus of welcoming you back! Yay! I recently finished Stephanie Kallos' SING THEM HOME and I loved it. A great book to fall into. I just ordered OLIVE KITTERIDGE, so that will soon be in my TBR pile.

It's odd-- thanks to Facebook it doesn't really feel like you've been away, but it has been a while for both of us...

Know what you mean about exercising and blogging - it's good to see you back, only I've been away for a while as well and MUST pick up with you and everyone else... Your reviews are great as usual.

Lisa, it's wonderful to see you back, but, please, do come back...
I was thinking of reading "Infinite Jest" when I heard of Wallace's suicide, but I'm not sure I can try.

I was thinking of you and your appreciation for Marcel Proust when I stood in front of his tomb in the Pere-Lachaise cemetery.

Hey thanks Lisa! I've gotten used to chatting with people on FB and have to get back in the habit of checking out blogs.

Where have you been? Reading obviously! Glad to see that you've posted something newer than three months. :D Anyway, hope all is well. Hit me up sometime and catch up. I'll be out in CO again in September. 18th-25th I do believe. Laters!

Welcome back, indeed! And I'm so glad you loved Vicki's book. I'm posting about it this week on Mother Words. Amazing, wasn't it?

Alas, you came back but disappeared again. Now that I'm home from Clarion, I was hoping to see what you've been reading and what you thought of it. Hope you are OK.

So I apparently wasn't as ready to come back as I thought I was. I blame it all on David Foster Wallace and the spell he put on me. I think I'll post the list of books that have kept me preoccupied and then just hope that relieves the feeling of being overwhelmed and not knowing where to pick back up again enough to kick start me. I just love knowing that so many of you are still with me. Thank you.

Your list is both informational and inspirational. There are many possibilities among the books you discuss. I'm currently rereading The Iliad and reading Infinite Jest (as part of Infinite Summer). Next month I'll be rereading Proust's Sodom & Gomorrah for a class at The Newberry Library.

James, I'm so happy to see you here and I wish I'd known you were doing Infinite Summer too! I read your blog every day and have sent lots of others your way too. There has been a lot of Infinite Jest discussion on Twitter and lots of great posts. I am very anxious to hear your thoughts about it.

Lisa, if you run out of newest translations of Proust, don't be afraid of the Scott-Moncrief version, which I think is still the best read. If you want some "candy" for your ipod, there's a great audio version (Naxos) read by an actor named Neville Jason who is just spectacular. It's sbridged, but a nice enhancement for the full set. And if you get to Paris, take a train down to Illiers, which is "Combrais" (in fact, the town changed its name to Illiers-Combrais). If you walk around the town and tour the house, you can see or project, the local details Proust builds mood and setting with in Book 1. Fascinating.