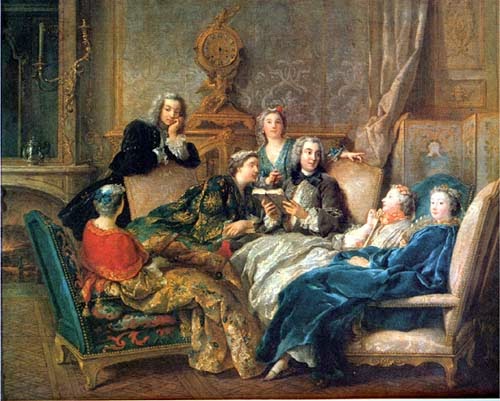 So how does this grab you – how about a monthly Salon-ish gathering that is part book club, part film club, part supper club, part cultural get together? I’m thinking this could be a real-world group with a virtual component – like we could establish a Facebook group so that friends who are far away could participate in book and film discussions, but friends who are local could meet monthly and maybe take some trips to local museums and cultural sites. Our monthly meetings could be a supper club of sorts too, where we could enjoy anything from light refreshments to multi-course meals – maybe even something that relates to our book club selection, or we would just order Chinese or Thai -- or something else.

I would love to host this soiree, though it wouldn’t have to be always at my house – but I do want to set the expectation of what kind of things I would want to read and watch. On the sidebar of this blog are lists of books I read between 2007 and 2010, to give you an idea of the type of book I'd like to keep reading. Please take a look and decide if we share a similar taste. The book selections can be old or new – I don’t care which. The size of the group doesn’t have to be set – people may want to pop in and out sporadically, depending on their interest in the books and films we’ll discuss and I hope we have both men and women. I would love it if the group included family, friends and neighbors from all over, even if you don’t participate much.

How would that be, hmm? Would you be interested? Shall I add you to the Somewhere-by-the-Sea Salon Facebook Group? Let's see where this goes!

Was it the Blue Pill, or The Red? 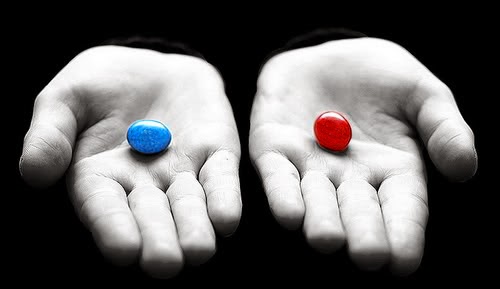 There are moments, usually when I have some cable news network on to keep me company, when I'm overtaken by an all-encompassing, surreal, dystopian queasiness. It's like the blue pill from The Matrix has kicked in (or the red one, I can never remember) and I'm just now realizing that something  terrible has happened, we have gone past a point of no return and we are hurtling toward an existential horror, and in those moments, I have this weird gratitude that I've already lived well more than half the years I've probably been allocated. I get a simulataneous twinge of guilt that I won't be around to help out when the shit really hits the fan and there is anarchy, and the water is gone, and zombies rule the earth. And then I will notice the man I love, outside my window and he's cutting cardboard into flat squares that will fit into the recycling bin and I will smell the stew that's bubbling on the stove and I will hear the hum of the furnace kicking on and I remember how lucky I am to have this life and for the moment, I feel safe.

I'm sorry that it's been so long, Eudaemonia. I knew on that late December day in 2009 when I posted my last words that I was no longer all about the books and I was not going to be one of those people who write them, but I didn't know where I was going or who I was becoming. I'm finally here and though I still don't know what the point of it all is, I do know that I am drawn back here to try and work it out. Perhaps it's no coincidence that for days I've been opening closets and drawers and boxes in order to touch each thing and to figure out what belongs and what no longer fits in this New England life of mine. Piles of discards and donations form and disappear, cabinets and shelves empty and refill, each chosen object polished or folded or washed and replaced with just a little more respect than it had before. The ones that don't make the cut, I silently thank for their service. This is going to take some time, but now that it's started, the process does feel urgent.

And so it is with all things in the world. Which of the the myriad of issues gets my head space and what gets discarded? Which tragedies must I turn away from lest they eat me alive and which of them must I bear the weight of because I live in this world and I have a heart? Where do I store those thoughts that deserve revisiting, that I can't just dismiss? The internet and its widespread adoption by everyone, not just the technically savvy has made engagement much trickier and more frustrating. This was a much smaller world when I started Eudaemonia. My online existence was tied to a few dozen like minded souls, fellow bloggers who made a practice of working through their ideas meticulously and with care. Over time most of my blogging friends and I wandered away from our blogs for the faster paced appeal of Twitter and Facebook. And I must say, I was happy there for a time. But now, my interactions have expanded to include so many more souls beyond that early group of thoughtful folk and the fast paced interactions have become superficial and unsatisfying. Neither the platform, nor the readers are friendly to the long, rambly thinking out loud that Eudaemonia was so good for.

It's tempting to try and go back to the world of Eudaemonia, where not only were my readers thoughtful and intelligent, but my friends and I tended toward the same politics and worldview. It was comfortable and reassuring. But that Eudaemonia is five years gone. Twitter allowed me to continue living in my own private echo chamber for a while, but alas, Facebook does not. If it were only that my friends, relatives and acquaintences merely differed in opinion, but were thoughtful and informed and able to discuss their differences in a polite and reasoned fashion, it would be uncomfortable, but productive. But as we all know, the world is not made up of only intelligent, informed and articulate folk. In fact, the democratization that the internet provides has made me realize that the intelligent, informed and articulate folk are probably a tiny minority. It does no greater good to seek out subgroups of people who we are drawn to and who will violently agree with my ideas. No good at all. It also does no good to post controversial subject matter within forums like Facebook because -- I don't have to explain why not. Everybody knows. Is it possible to reach people who don't think the way I do? Is it worth it to even try?

So my inclination is to come back to Eudaemonia in 2015 to see if I might work through some of the complicated feelings I have about things happening in our world. Throughout this existential crisis I've been having, I've predicted, in the annoying way that people over fifty seem to have, that this summer was the start of a decade of unrest, uncertainty and revolution. I believe the internet is facilitating a toxic exchange between an increasing number of groups of people who no longer think about "us", but think about "us" and a growing number of "thems".  This devolution can't be inevitable.

I haven't given much thought to how I'll come back, but if you're still with me at this point in the post, I love you and I appreciate you and I wish you a Happy 2015.
Posted by Lisa at 12:17 PM 12 comments: 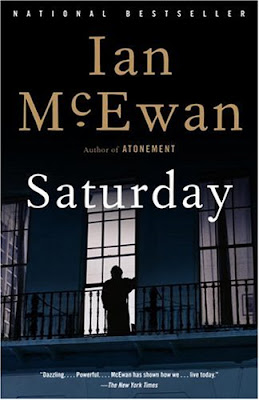 Saturday by Ian McEwan spans the course of a single Saturday in the life of London neurosurgeon Henry Perowne. It's February 2003 and Henry wakes before dawn. As he stares out his window he sees a bright light that he at first assumes is a comet, but then realizes must be a plane on fire headed into Heathrow. The image and reporting on the plane will follow Henry throughout the course of the day and provide an ominous reminder that it is now a post-9/11 world. This day there is also an enormous protest in London against British involvement in the Iraq War.

Henry Perowne is a wealthy, successful neurosurgeon with a good marriage to a woman he loves and with two children on the verge of independence. His son is a talented blues musician and his daughter, Daisy has been away in Paris, and is about to have a book of poetry published.

The entirety of the novel is spent with Henry's interior monologue and although he has a brilliant understanding of the human brain, he is often mystified by how others think. In addition to the nagging discomfort that the flaming plane and the war protest bring to the otherwise normal day, Henry has a series of one on one scenes with those closest to him.

After meeting a colleague to play racquetball, he has a frightening encounter with three thugs. The leader exhibits a barely perceptible tremor and some speech traits that Henry is able to diagnose as Huntington's. His comments alluding to his observation of the thug's symptoms buy him the time to escape what was certain to be quite a violent episode and Henry goes on with his day.

The evening climaxes in a frightening episode in the Perowne home with the villains reappearing.

Although the unpredictability and uncertainty of the post-9/11 world loom large throughout this story, the theme that stood out more to me was that of the main character's attitude toward fiction as useless. Daisy has given him titles to read and to his credit, Henry does read them but doesn't see the point in inventing things and finds many of the devices in fiction to be unrealistic and overly convenient.

McEwan could be accused to stretching his art to the breaking point in Saturday. Some readers and reviewers have complained that the long, detailed scenes, the obvious political commentary and the structure of the book, with the bones nearly on the outside don't work. I suppose if you were reading this book simply for the story, you could make a case that they don't. I read it with an eye to seeing the detail and delighting in exposure to how it all works and thought it was excellent.

Next up: The End of the Affair by Graham Greene
Posted by Lisa at 10:36 PM 4 comments: