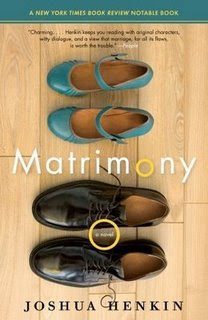 "It is 1987, and Julian Wainwright, aspiring writer and Waspy son of New York City old money, meets beautiful, Jewish Mia Mendelsohn in the laundry room at Graymont College. So begins a love affair that, spurred on by family tragedy, will take Julian and Mia across the country and back, through several college towns, spanning twenty years.

From the moment he was born, Julian Wainwright has lived a life of Waspy privilege. The son of a Yale-educated investment banker, he grew up in a huge apartment on Sutton Place, high above the East River, and attended a tony Manhattan private school. Yet, more than anything, he wants to get out--out from under his parents' influence, off to Graymont College, in western Massachusetts, where he hopes to become a writer.

When he arrives, in the fall of 1986, Julian meets Carter Heinz, a scholarship student from California with whom he develops a strong but ambivalent friendship. Carter's mother, desperate to save money for his college education, used to buy him reversible clothing, figuring she was getting two items for the price of one. Now, spending time with Julian, Carter seethes with resentment. He swears he will grow up to be wealthy--wealthier, even, than Julian himself.

Then, one day, flipping through the college facebook, Julian and Carter see a photo of Mia Mendelsohn. Mia from Montreal, they call her. Beautiful, Jewish, the daughter of a physics professor at McGill, Mia is--Julian and Carter agree--dreamy, urbane, stylish, refined.

But Julian gets to Mia first, meeting her by chance in the college laundry room. Soon they begin a love affair that--spurred on by family tragedy--will carry them to graduation and beyond, taking them through several college towns, spanning twenty years. But when Carter reappears, working for an Internet company in California, he throws everyone's life into turmoil: Julian's, Mia's, his own.

Starting at the height of the Reagan era and ending in the new millennium, Matrimony

is about love and friendship, about money and ambition, desire and tensions of faith. It asks what happens to a marriage when it is confronted by betrayal and the specter of mortality. What happens when people marry younger than they'd expected? Can love endure the passing of time?

In its emotional honesty, its luminous prose, its generosity and wry wit, Matrimony is a beautifully detailed portrait of what it means to share a life with someone--to do so when you're young, and to try again, afresh, on the brink of middle age."

If you'd prefer to hear an interview with the author, check out this video from ExpandedBooks:

I had Matrimony on my wish list soon after it was released. I've always had an affinity for the academic novel and stories that feature writers. In the fall of 2007 I read this guest post Joshua Henkin did on M.J. Rose's, Backstory and this one at Conversational Reading. These are both great posts that go into detail about the process of writing Matrimony and I think it's interesting (and somewhat reassuring) that the author's first novel took three years to write and the second took ten.

If you Google Joshua Henkin, you'll find pages and pages of hits. This author has to be the James Brown of the publishing industry and I'm sure his publishing house loves him. Published and soon to be published authors should take note of the promotion efforts this author has taken to get the word out about this book.

Everything I've read that he's written has been engaging and entertaining but I have to say, he 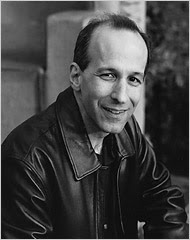 had me with his marathon series of guest blog posts at The Elegant Variation (please note that the preceding link takes you to all 26 guest posts from September 2008 at TEV, but you'll have to scroll past the first five guest posts to get to Josh's posts. Or don't scroll past them because they're all about Jose Saramago's novel, Blindness, one of my favorite reads last year). I don't know the story behind the guest posting challenge that resulted in the 26 posts, but they're truly worth taking the time to read. There are gems on writing and craft, the publishing business, popular culture, questions writers get asked, politics, books and writers, and all kinds of surprising topics. And Joshua Henkin is funny.

Now I actually felt a little guilty because even though I planned to buy the book, I won an autographed copy of Matrimony at Leslie Pietrzyk's excellent blog, Work in Progress. I received the book with a lovely personalized note from the author soon after and I took it with me to Scotland.

I really enjoyed the novel and my recommendation is that if you loved Crossing to Safety, by Wallace Stegner, you'll love Matrimony.

If you'd like a chance to win a copy of Matrimony, please send me an email at lisa dot eudaemonia at gmail dot com. I'll choose a winner at the end of the week and your copy will be on its way.

This is not something I'd likely become aware of on my own so thanks for mentioning it and getting the word out. I'm defintely going to enter the contest.

I'm getting an error for the email address there. it's not lisa dot is it?

Charles, Hopefully, you got my email response with my email -- but don't worry. I've got your name listed. Also, there's a link to my email in my profile too.

A new amazing author to check out, woohoo!! K.

Awesome! I emailed you right away. Thanks for the chance. :)

I enjoyed very much reading your review, Lisa. Thanks for always pointing out interesting books.